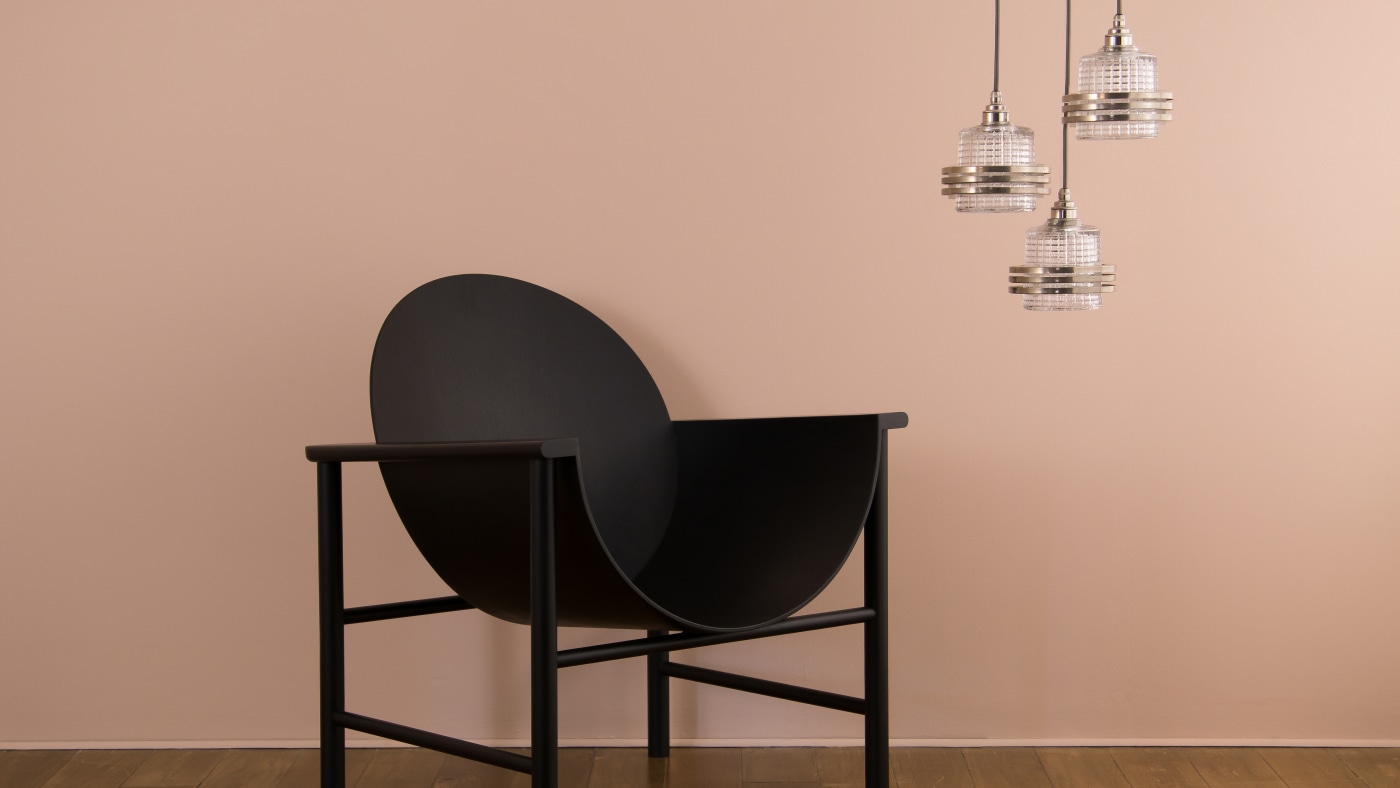 Ever inquisitive, and inspired after our recent salvaging trip to the Czech Republic - where we were fortunate to find a number of these Bohemian crystal glassware lights - we wanted to find out more about the illustrious history of Bohemian glass...

For centuries, Bohemian glass has been celebrated as one of Europe's most treasured - and most distinctive - luxury products. Spanning a wide range of glassmaking techniques, from ruby-coloured stained glass windows and stemmed wine glasses, to crystal clear and intricately cut chandeliers, today Bohemian glassware is highly collectable.

The country once known as Bohemia, now located in present-day Czech Republic, is recognised around the world for its long and celebrated tradition of glassmaking, thanks in-part to the abundance of high-quality natural resources found in the local area. The land is rich in potash, a potassium-rich mineral derived from the ashes of burned wood, and chalk, which produces a number of varieties of Bohemia's famed crystal clear glass. 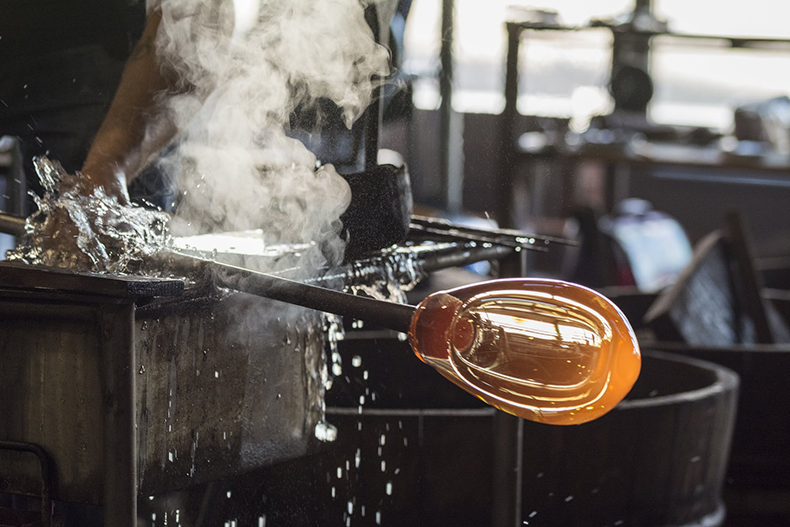 The tradition of glassmaking first started in 1548 in the Crystal Valley in Bohemia, the westernmost region of the Czech lands, using natural mountain crystals. Then, in 1688, Michael Müller developed a method of creating man-made crystal glass using potash and chalk - his technique was then used by most Bohemian glass factories leading to the birth of Bohemian crystal glass making. This unique glass was also used by Caspar Lehmann, a gem cutter in Prague, who adapted it to the technique of gem engraving with copper and bronze wheels.

This led to former Czechoslovakia becoming the key source of this decorative glassware as well as gaining an international reputation in the Baroque style with its vibrantly coloured glass. The technique was then thrust into a new age by Daniel Swarkosvki, born in Bohemia in 1862, who in 1895 invented a way to cut Bohemian glass crystals by machine and founded the well-known company that bears his name. 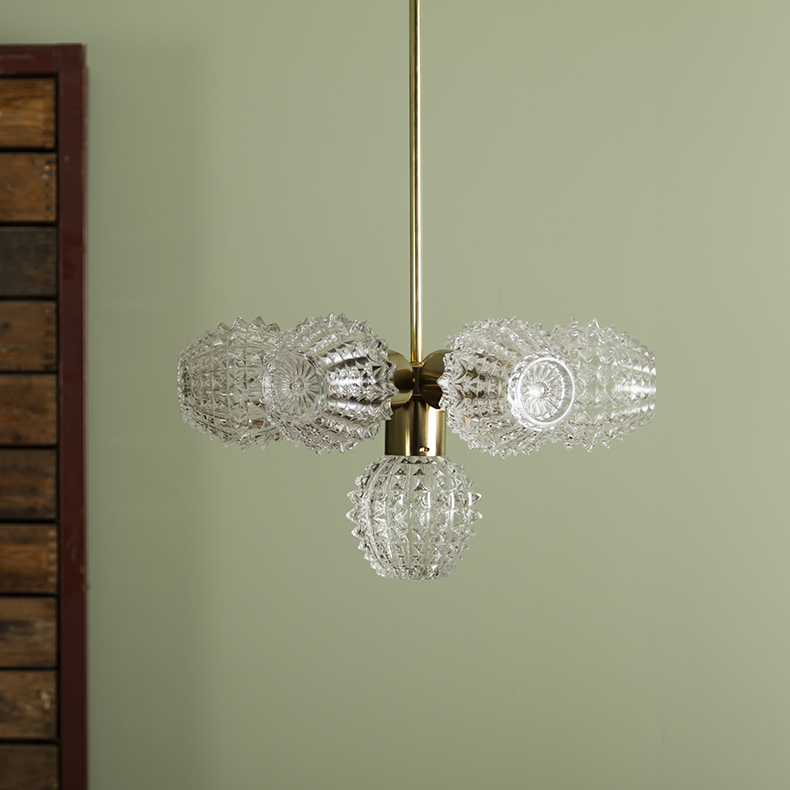 Above: A retro 1970s chandelier made by famed Bohemian glassworks Lustry Kamenicky Senov.

The first Bohemian glass lamps and pendants were created in Kamenicky Senov at the end of the 17th century. The first bohemian glass chandelier factory was founded in 1724 by glass cutter Josef Palme in Prachen. Moving away from coloured Bohemian glass and back into its original transparent variant, Josef created one-off pieces for royalty such as Prince Eugene of Savoy, Hof Castle and Archduchess Maria Elizabeth. Mass production of Bohemian glass fittings, and the continued use of transparent glass, began at the birth of light company Eliase Palme & Co in 1849 and continued post Second World War when all chandelier companies were put under joint administration under a new name by the state, Lustry Kamenicky Senov, who produced Bohemian glass lighting and chandeliers for domestic use and the USSR. 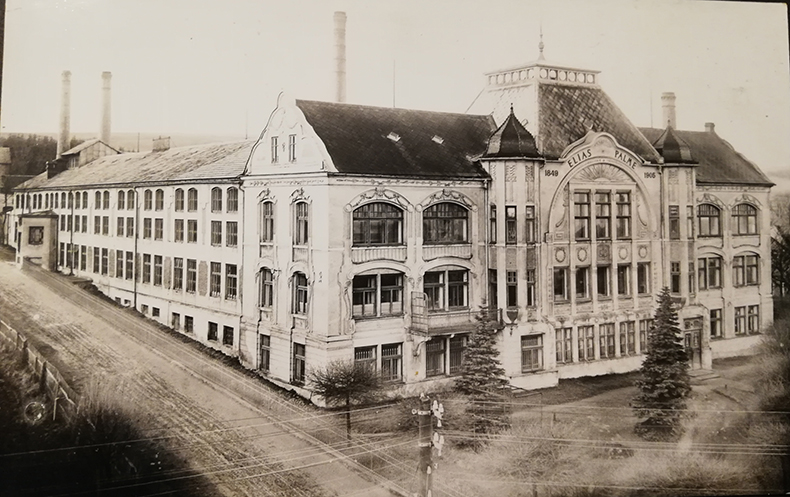 A photo dating back to 1947 of the Eliase & Co lighting factory in Kamenicky Senov.

Around 1960, glass chandelier production consisted of ornate ‘Theresians’ inspired by the 18th century Bohemian chandeliers made for Austrian Empress Maria Theresa. The chandeliers consisted of metal arms lined with decorative glass mouldings which Bohemian glass crystals hung from. This later developed into a more retro style, popular within hotels, where hand blown glass globes would be suspended on a metal rod - like our unique 1960s Lustry Kamenicky Senov Czech chandelier featuring five striking Bohemian glass globes. Traditional decorative glass etching continued in the 1960s but started to include geometric shapes, as seen on our 1960s Czech glass pendant lights composed of open-bottomed glass shades salvaged from a larger Lustry Kamenicky Senov chandelier once installed in a civic building in Prague.

Production of Bohemian glass has a very long tradition which incorporates a variety of different techniques, styles and colours. Still regarded as some of the highest-quality glasswork in the world today, we are proud to keep this long lasting tradition alive through salvaging and restoring these unique and one-off Bohemian glass pieces.

A history of heat lamps

From the Ancient Egyptians to modern-day uses - Dr. Tania Woloshyn traces the fascinating medical history of our heat lamps.

Perihel light therapy lamps are a rarity which we are occasionally lucky to find. They were manufactured in many different styles for home use from single head sun lamps to the deluxe twin headed infar red and ultraviolet. With their over engineered elegant detailing, these lamps were developed by Perihel for theÂ once popular light therapy and wereÂ used both in hospital settings and at home.