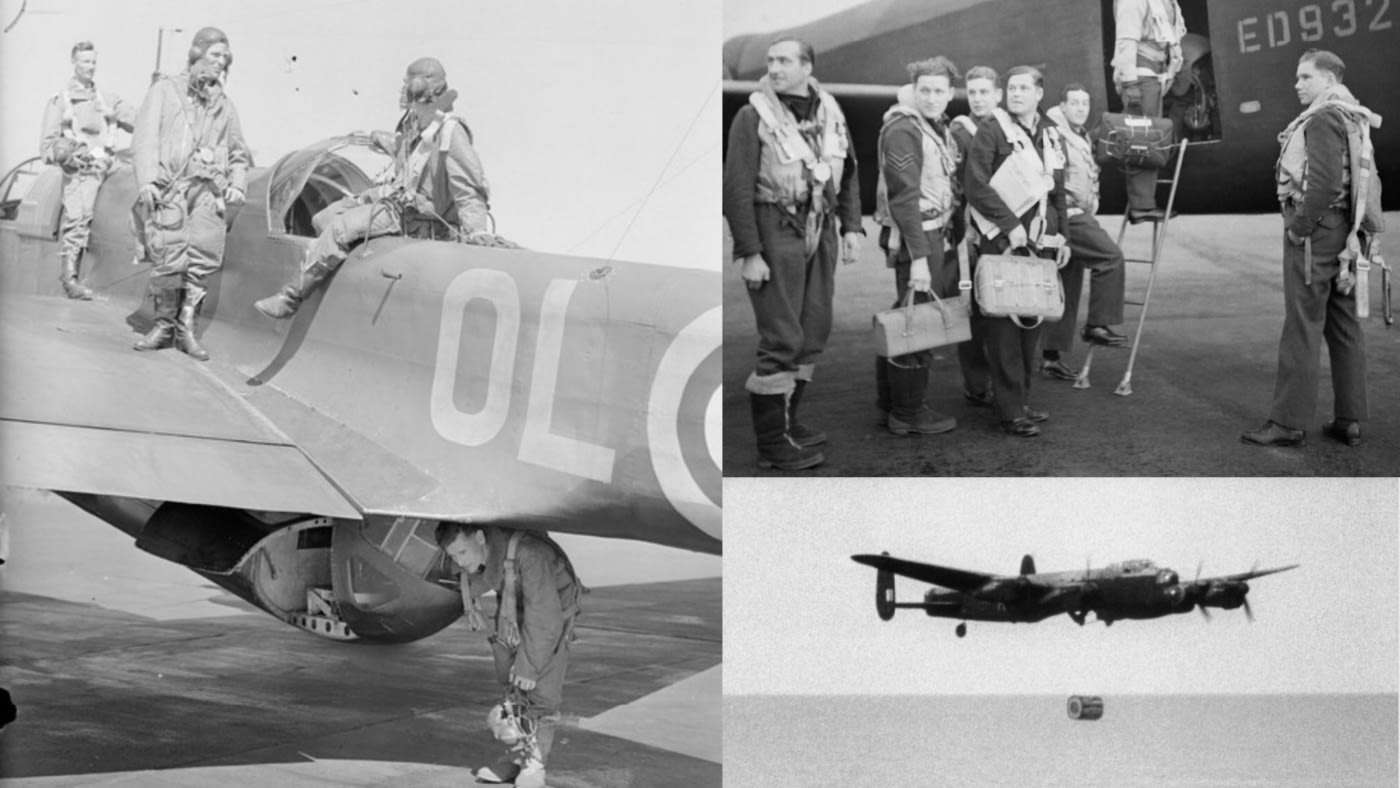 With a special thanks to the Imperial War Museum for their archive imagery.

From playing home to the world-renowned Red Arrows air display team, to the launch of the Dambusters mission in World War Two, RAF Scampton in Lincolnshire is, sadly, set to close, calling an end to a century-long history full of surprising twists and turns.

Back in 2018 when we first caught whiff that the site was to be sold off by the Ministry of Defence, we were immediately intrigued by the RAF Scampton story. The journey led us to the lucky salvage and restoration of an astonishing array of more than 50 airfield taxiway lights once installed in the runways of the iconic site. Keen to find out more - and how we might be able to help further preserve the heritage of the station - we thought we’d share the fascinating history we discovered there along the way. 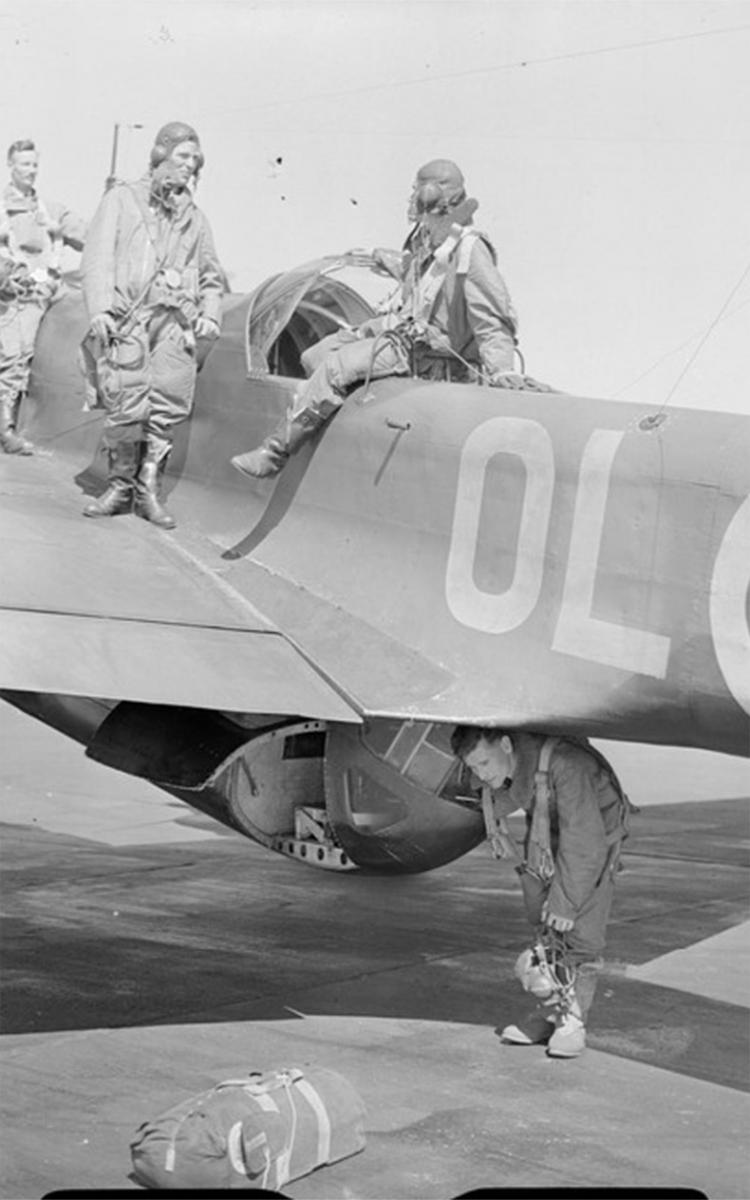 RAF Scampton stands on the site of a First World War Royal Flying Corps landing field, originally called Brattleby. Opened in 1918, the station is one of the RAF’s oldest. Remaining in operation almost uninterrupted ever since, it has provided a base for fighters in the First World War, bombers during the Second World War and V-force Avro Vulcans during the Cold War.

At the outbreak of the Second World War, 49 Squadron and 83 Squadron moved into Scampton, re-equipping with twin-engine bomber planes known as Handley Page Hampdens for the hazardous task of low-level minelaying - codenamed ‘Gardening’ - and the bombing of ships. By 1942, the squadrons had changed to the Avro Lancaster plane, and were then replaced at Scampton by 57 Squadron and the now famous 617 Squadron responsible for the Dambuster raid during WWII. 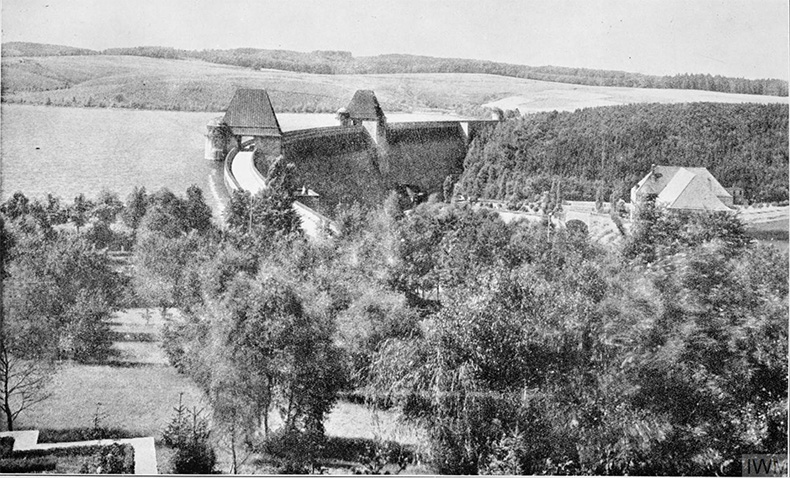 On the night of 16-17 May 1943, Wing Commander Guy Gibson led 617 Squadron of the Royal Air Force on an audacious bombing raid to destroy three dams in the Ruhr valley (pictured), the industrial heartland of Germany. The mission was codenamed Operation 'Chastise'.

Plans for an attack on the dams had first been considered in 1937, as it was thought that the destruction of this dam and others in the region would cause massive disruption to German war production. The dams were fiercely protected, being as they secured the water supply for much of the surrounding area, as well as generating electricity. Torpedo nets in the water stopped underwater attacks and anti-aircraft guns defended them against enemy bombers. But by 1943, 617 Squadron had a secret weapon: the 'bouncing bomb’. 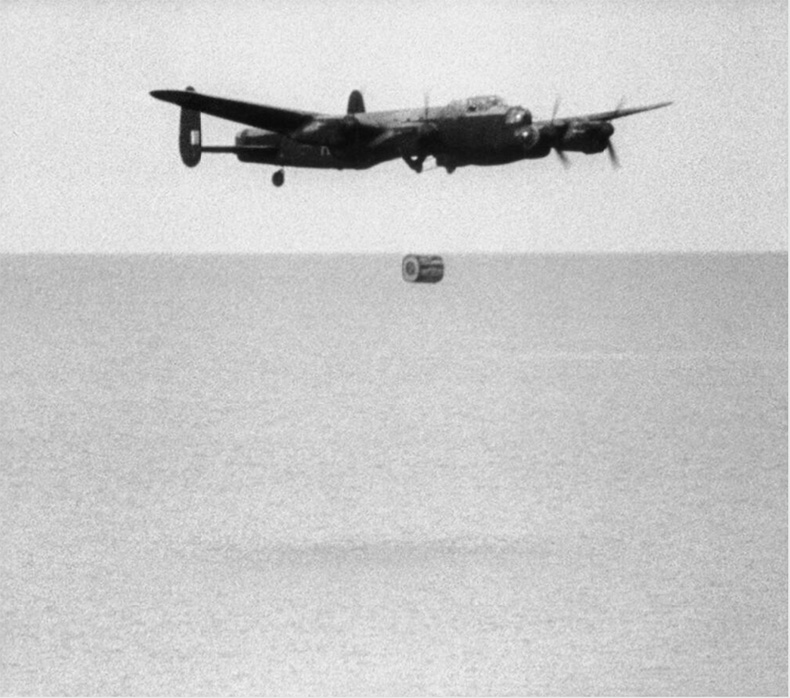 Designed in 1942, British engineer Barnes Wallis got the idea for a bomb that could skip across water by experimenting by bouncing marbles across a water tub in his back garden. After extensive tests and development, it was established that the drum-shaped bomb, codenamed ‘Upkeep’, needed to be dropped from a height of 18m and at a ground speed of 232mph in order to be effective at damaging the dam. All that was needed now was men to fly specially modified Lancaster bombers which would carry the 'Upkeep'. 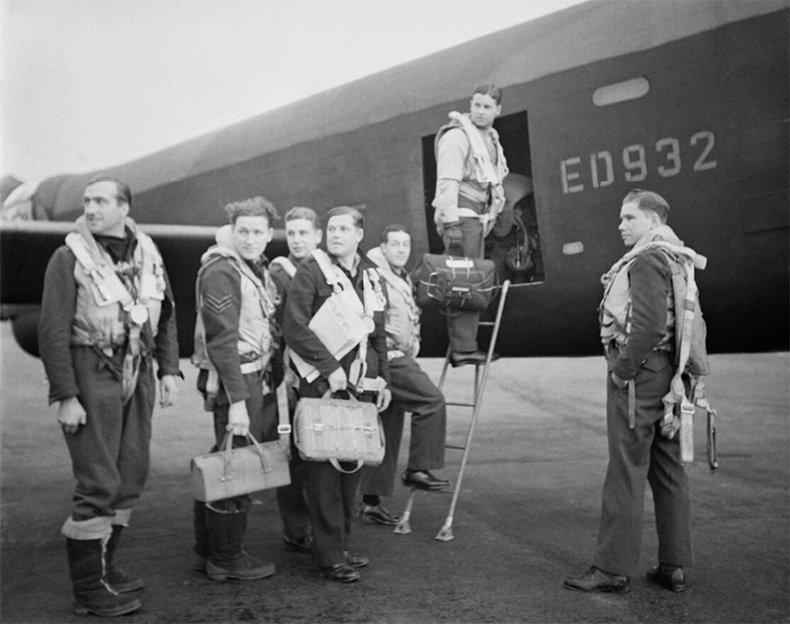 In late March 1943 a new squadron, 617, was formed to carry out the raid. Led by 24-year old Wing Commander Guy Gibson (pictured in door of aircraft) it comprised an international aircrew from Britain, Canada, Australia, New Zealand and the USA. With one month to go before the raid, and with only Gibson knowing the full details of the operation, the squadron began intensive training in low-level night flying and navigation. They were ready for Operation 'Chastise'. 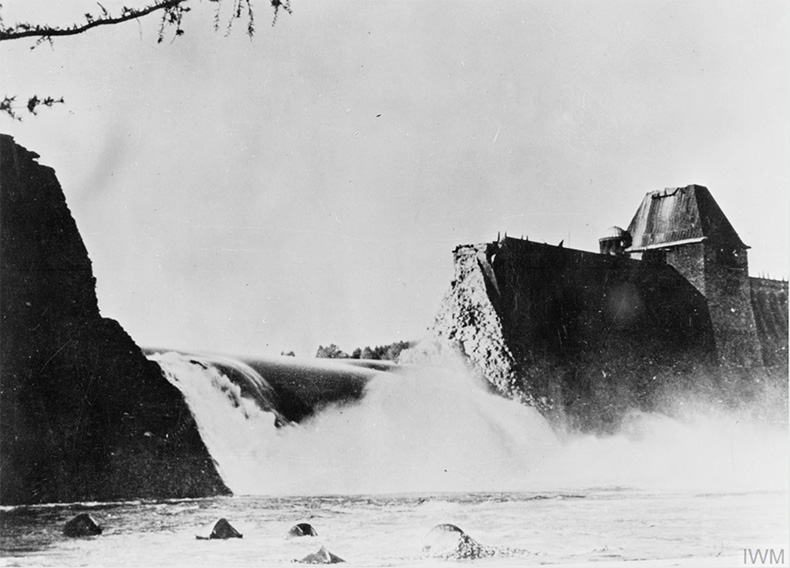 Gibson was flying in the first wave and his aircraft was first to attack the Möhne (pictured) at 12.28am, but five aircraft had to drop their bombs before it was breached. The remaining aircraft still to drop their bombs then attacked the Eder, which finally collapsed at 1.52am. Meanwhile, aircraft from the two other waves bombed the Sorpe but it remained intact.

Of the 133 aircrew that took part, 53 men were killed and three became prisoners of war. On the ground, almost 1,300 people were killed in the resulting flooding. Although the impact on industrial production was limited, the raid gave a significant morale boost to the people of Britain.

Home of the Red Arrows 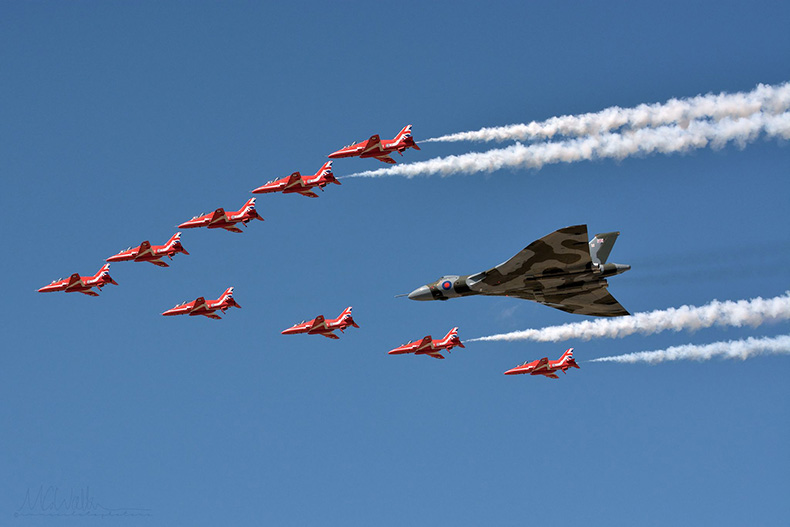 Above: The Red Arrows and the last airworthy example of a Vulcan B2 Bomber pictured in 2015, both of which call RAF Scampton their home. Credit: Marc Dubya.

Representing the speed, agility and precision of the Royal Air Force, aerobatics teams have long-held an important role within the RAF, assisting in recruitment and acting as ambassadors for the UK at home and overseas. Indeed, an RAF pageant in 1920 at Hendon is believed to be the first RAF aerobatics team, with teams from front-line bi-planes.

It was in 1964 when the RAF amalgamated its display teams into one, premier unit – the Red Arrows. Fast forward some 20 years and in 1983 RAF Scampton became the Red Arrow team’s new home. Apart from a period at RAF College Cranwell between 1995 and 2000, the Lincolnshire station has been the Red Arrows’ permanent home ever since.

Flying distinctive Hawk fast-jets the team is made up of pilots, engineers and essential support staff. With their trademark Diamond Nine shape and combination of close formations and precision flying, the Red Arrows have been displaying since 1965, performing almost 5,000 times in 57 countries. The Red Arrows have both a wonderful history and the support and interest of millions of well-wishers. 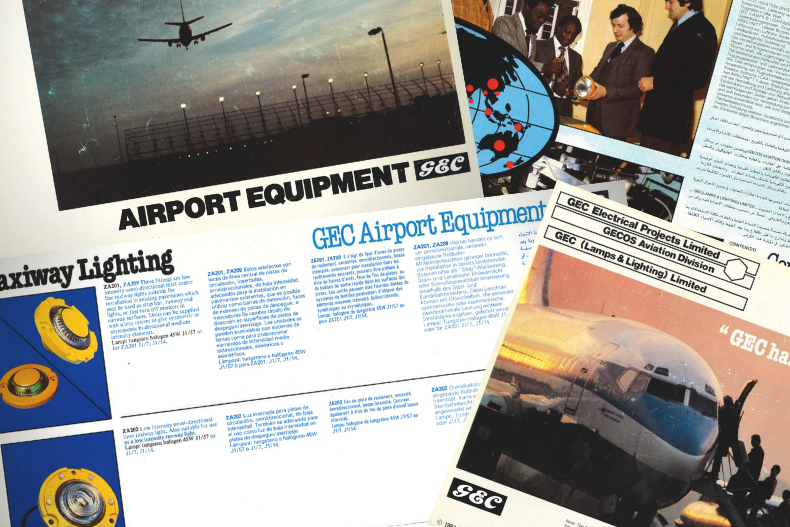 Above: Extracts taken from our internal archive - a brochure by renowned British lighting brand General Electric Company (G.E.C.) detailing some of the various taxiway lights we have been fortunate to salvage from the site. 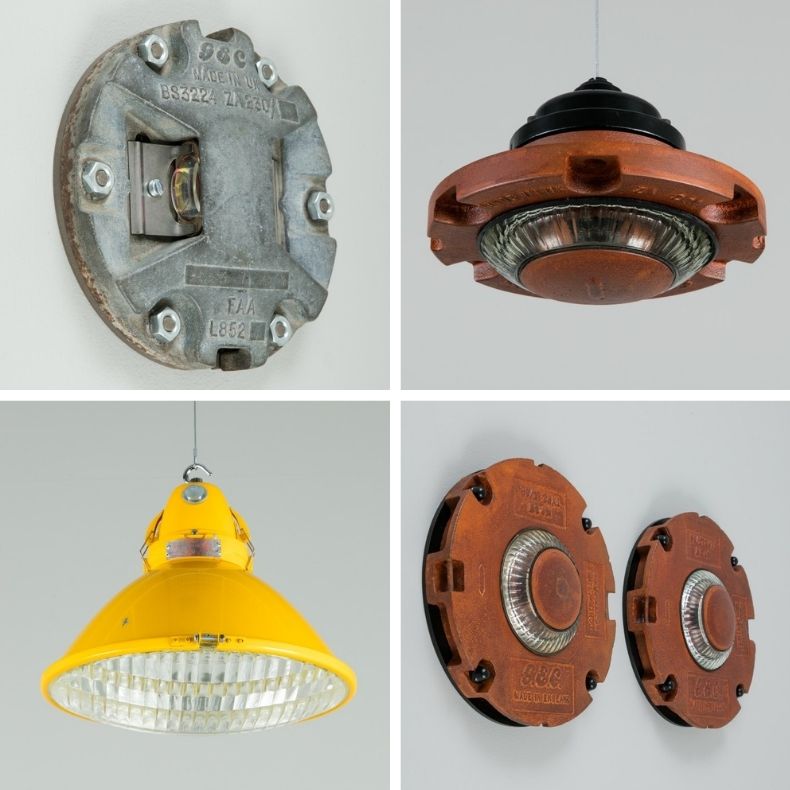 Back in April 2020, after the first month of lockdown in Britain, the Red Arrows resumed practice flights above RAF Scampton. According to the RAF, it is necessary for pilots to fly at least once every 31 days to maintain the safe flying proficiency required to fly these high-precision aircraft. The flights created positive, phoenix rising-style headlines across the nation.

The future of RAF Scampton

Following further announcements by the Ministry of Defence (MOD), RAF Scampton is sadly due to close in 2022, with nearby RAF Waddington to become the new home for the Red Arrows. The move forms part of a 10-year cost-saving exercise for the MOD.

With imminent closure on the horizon, we feel fortunate to have visited this place of historical significance, to salvage this unique collection of airfield taxiway lights once installed there, and to pay homage to the illustrious heritage of this special site.

Below: A row of three Airfield Taxiway Lights (V4) today ready for modern-day use above a sideboard home. 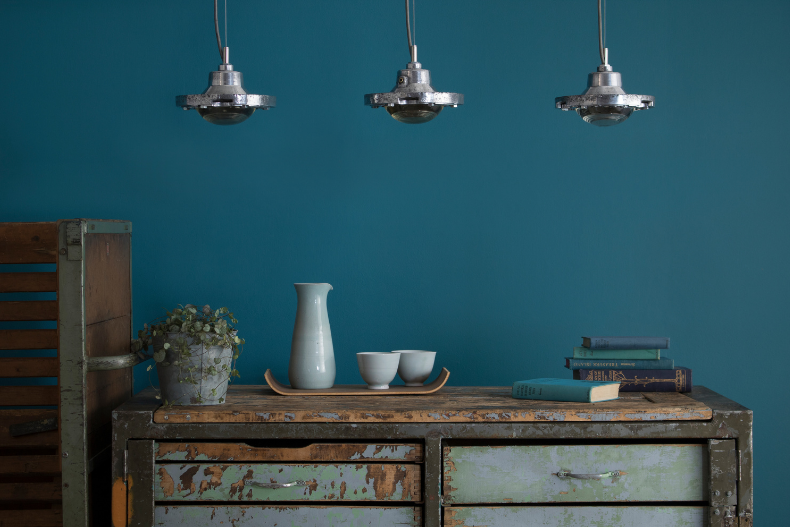 A glimpse behind the scenes showing the story of a skinflint light from sourcing through restoration to it's final installation...

It's such an evocative image isn't it? The American traffic light hanging over the road, the stuff of so many films. That's exactly where our US traffic light pendants started their lives.